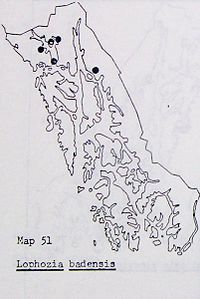 
Southeastern Alaska Distribution: See Map 51. Perhaps restricted to the northern portions as indicated, but since equivalent habitats were not satisfactorily investigated further south the distribution cannot be considered completely known. Not previously reported.
Habitat: In southeastern Alaska known only from very recent tills in open, but moist, sites; generally on basic substrata. Elsewhere known as an obligate calciphyte, restricted (except in the far north) to ledges and cliffs. In the Arctic on a variety of mineral soils that are moist or wet.
Comments: Perianths common, but sporophytes not seen. In Glacier Bay the species forms extensive colonies (that harbour a variety of minute organisms) on very recently deposited tills that have gained the nicknames "Black Crust" or "Black Mat".