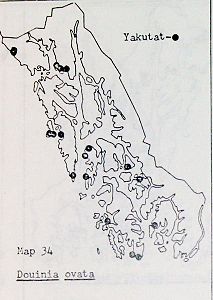 
Southeastern Alaska Distribution: Throughout.
Habitat: Among bryophytes on the bark and twigs of Alder (rarely other tree species) by the sea or along streams. Elsewhere in the range also on siliceous rocks and boulders.
Comments: In southeastern Alaska never as more than a few strands, never as pure colonies. Often fertile. Widespread, but always near water either of streams, the sea, or (rarely) bogs. this species is considered an “Atlantic species” in Europe, and is a striking example of the western North American - western European disjunction.