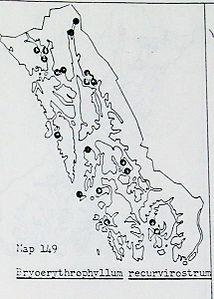 
Southeastern Alaska Distribution: See Map 149. Throughout.
Habitat: Common in shady sites on calcareous rocks, cliffs, rock outcrops, moraines, and soils. Most frequent at elevations in lower forest zones.
Comments: Usually fertile. This is one of the most frequent mosses in southeastern Alaska and is generally a good indicator of even slightly calcareous substrates. The range of the species is subcosmopolitan. It occurs in both hemispheres, but not in the classical bipolar sense as most of its disjunctions are basically connected via alpine populations.