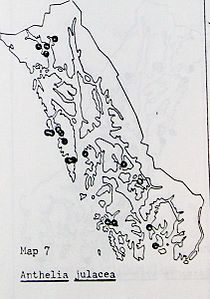 
Southeastern Alaska Distribution: Throughout, usually in the subalpine and alpine, but occasionally to sea level.
Habitat: Common and often extensive over rocks and bare mineral soil where there is seeping water, along stream margins, on damp cliff shelves, and sometimes on wet mud and peat.
Comments: Dioicous, always sterile in southeastern Alaska. Much of the present range is in areas within or near Pleistocene glaciation. Its distribution probably reflects a complex glacial history, plus the availability of a combination of a montane (even in the Arctic) conditions and a continuously moist mineral substrate that generally occupies an exposed site. This might, in part, account for its absence in the central Canadian Arctic and the eastern Asian Arctic.