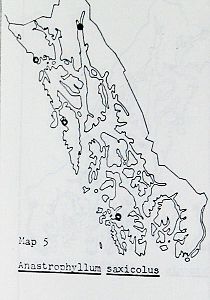 
Southeastern Alaska Distribution: Known from three hyperoceanic sites from near sea level to about 1000 ft. plus an old record by Kurtz (1885) from the “Chilkat mountains” which, by virtue of the report of their expedition, is somewhere in the vicinity of the Lynn Canal, certainly no further south than Juneau and no further north than Skagway.
Habitat: The three recent collections in southeastern Alaska were from peatlands characteristic of hyperoceanic situations with boggy peat accumulation between occasional bedrock outcrops, with stunted trees and bog vegetation. The specimens grew among a variety of bryophytes beneath dwarf trees or heathers.
Comments: Dioicous, usually sterile (sporopohytes not seen in Alaskan material), no gemmae. Considering the diverse ecology of this species (Schuster, 1969) it is surprising that it is not more widespread in in southeastern Alaska. Possibly the local sterility of the plant has reduced its distributional capabilities and most populations now extant are relatively close to sites of its refugium during the Pleistocene.