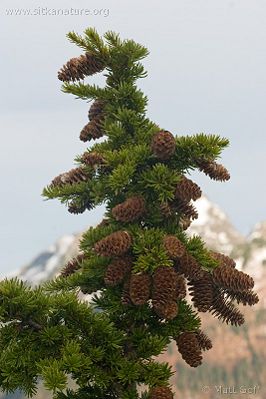 Mountain Hemlock: for more photos, see Sitka Nature Photo Gallery for Tsuga mertensiana
Mountain Hemlock (Tsuga mertensiana): This coniferous tree often the dominant tree in montane forests near treeline. It is the most typical clump forming tree in subalpine parkland that also is commonly found growing in krummholz at exposed locations in the mountains. In muskegs and mixed scrubby stands at lower elevations it is still found, though less commonly.

Although probably common throughout the region in its preferred habitats, there are only about 25 collections of this species in Arctos (with the biggest gap being from north of Sitka up along the Northern Gulf Coast - where perhaps it is less common? Also, with the exception of the single collection at Sitka, there are not really any collections from the central part of the region. )