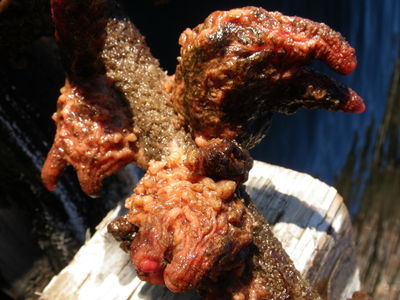 Warty tunicate:
Warty tunicate (Pyura haustor): This common tunicate looks most like Sea Hedgehog (Halocynthia igaboja), but its siphons are longer, and generally paler and less "hairy." It is found intertidally, subtidally, and on floating man-made structures.

This species is often covered by other sealife, making only the pink or red ends of the siphons visible, but it sometimes is found without sea life on it. The siphons are often quite long, and can be longer than the width of the body of the tunicate. The "skin" is described by Van Name (1945) as "tough and rather hard, usually discolored with mud and often completely encrusted, except toward the ends of the siphons, with sand, small stones, debris, or growth of hydroids or other organisms. [The test] is often raised into high, sharply defined ridges which meet and cross each other in various directions or may in some cases run roughly parallel."