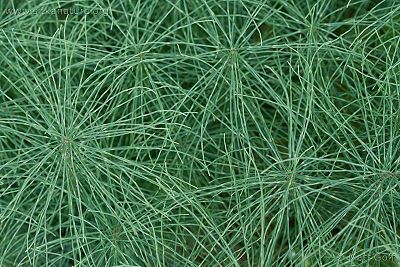 Range: Through out the United States and Canada

Comments: There are several species of Horsetails that occur along the coast of the north Pacific. Common Scouring rush is a stout, unbranched evergreen plant. Variegated Horsetail is evergreen and unbranched, but slender. Swamp horsetail produces its stems annually, but the fertile and sterile stems are similar. The fertile stems of Common horsetail die back after the spores are mature. Meadow horsetail can be distinguished from common horsetail by the persistent fertile stems which turn green and develop branches as they mature. The stems of Common and other annual horsetails are produced annually from perennial underground stems. The green stems and branches, not the leaves are the sites where photosynthesis occurs. Horsetails are rough to the touch because of the silica contained in the stem tissue. The common name “scouring rush” comes from the use of horsetails stems to clean and polish metal.