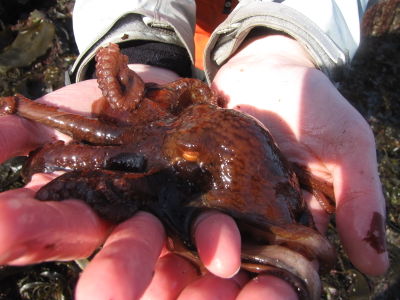 Enteroctopus dofleini looks like a species from further south - Octopus rubescens - which is smaller, and has three small flaps under each eye. Those flaps are not obvious when the animal is out of the water.Also, Octopus rubescens doesn't have the "ridged" look of the giant Pacific Octopus. Rather, it looks reticulated, sometimes almost warty.

Often tiny specimens are found (after all, this species has upwards of a hundred thousand eggs). These may be confused with deeper-dwelling species, such as Benthoctopus leioderma and Rossia pacifica, but their tentacles are long and they are spotted with blotches of reddish brown. The giant Pacific octopus can weigh as much as an adult person, and measure 24 feet with its arms spread.