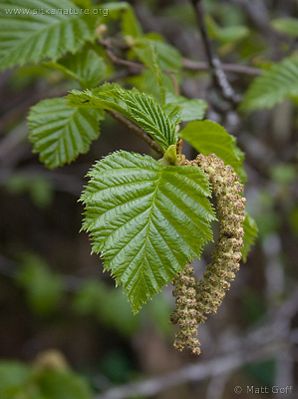 Collections from throughout much of the region, with a few gaps (none from Admiralty Island, for example). FNA suggests ssp crispa does not occur in the region, but rather the very similar ssp fruticosa occurs in the northern part of the region (approx. Juneau/Glacier Bay north).

From FNA account for ssp fruticosa: "This primarily subarctic Asian subspecies has long been mistaken in western North America for Alnus viridis subsp. crispa, which it closely resembles, or for subsp. sinuata (J. J. Furlow 1983b). It can be separated from the former by its larger and more coarsely toothed leaves, and from the latter by its much thicker, mostly single-toothed leaf blades."