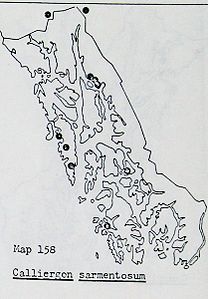 Ian Worley
[as Calliergon sarmentosum]
Southeastern Alaska Distribution: Probably throughout. Previously known from only one report from Lake Lindeman, British Columbia, near White Pass (Willams, 1901).
Habitat: In southeastern Alaska the species is known from near sea level to the alpine in wet areas, seeps, fens, stream banks, pool margins and snowmelt slopes. Although known only from sunny sites in this region it is reported elsewhere in its range from woodlands.
Comments: Sporophytes are not known in the southeastern Alaska material. This species is relatively common in the archipelago.