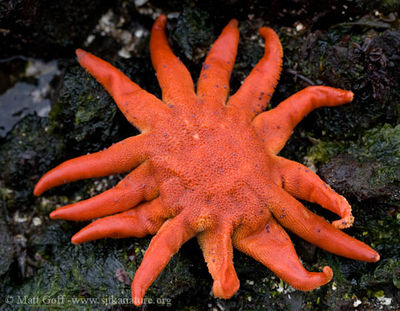 This sun star looks a lot like the more common Dawson's sun star (Solaster dawsoni), except that it has shorter, puffy arms, is more reliably tan-orange in color, and has much shorter adambulacral spines (those are the spines that line the edges of the groove that runs down each arm).

Sometimes, Solaster pacificus has stripes that run down each arm dorsally from the central disk much like in Stimpson's sun star (Solaster stimpsoni), but that species has much longer arms.

This species feeds mostly on sea cucumbers. It is reported to feed in the intertidal (on Long-footed white sea cucumber (Eupentacta pseudoquinquesemita) by Rita O'Clair), but tends to be more subtidal than Solaster dawsoni.