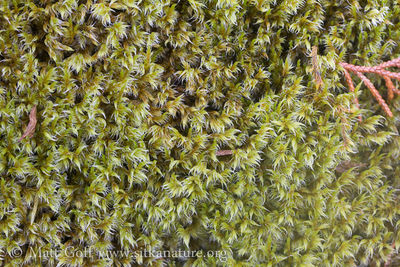 Ian Worley
[as Rhacomitrium lanuginosum]
Southeastern Alaska Distribution: Widespread.
Habitat: Common, and often abundant, in southeastern Alaska in open peatlands, occasionally on trees in bogs, also on soils and rocks in the alpine, especially in talus slopes. Restricted to exposed and sunny sites.
Comments: Occasionally with sporophytes, usually only in coastal sites. This species was reported by Cooper (1923b,c, 1931, and 1939) from the early successional stages after deglaciation in Glacier Bay, but the determinations were based upon hoary R. canescens var. ericoides. Subcosmopolitan, missing in most of Africa and parts of South America.