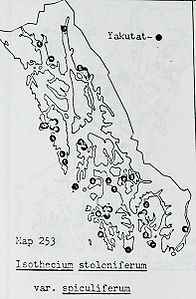 Ian Worley
[as Isothecium stoloniferum]
Southeastern Alaska Distribution: Throughout.
Habitat: Widespread and often abundant on bark and branches of trees, cliff faces, boulders, deadfalls, and occasionally mineral soils. From sea level to the subalpine.
Comments: Frequently with sporophytes. Williams (1966) discusses the variations within this species, and maps the distributions of the three recognized varieties. Williams and Schofield (1970) have clarified the nomenclature. The most common form of the species is correctly called I. stoloniferum var. spiculiferum and occurs on decaying wood and on the trunks and branches of trees. Isothecium stoloniferum var. stoloniferum is less frequent, notable for its robust size and large leaves, is predominately corticolous (although also on rock, decaying wood and humus), and distributed in the wetter portions of the range of the species. Map 253 does not distinguish between the varieties, however the maps of Williams (1966) indicate that the typical variety extends only northward to Baranof Island. Variety spiculiferum is thus far known away from the coast only in southern British Columbia, Idaho and Montana.