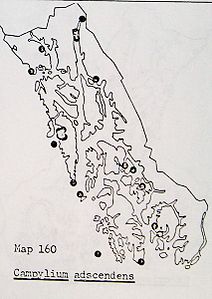 Ian Worley
[as Campylium adscendens]
Southeastern Alaska Distribution: Throughout, known from many citations.
Habitat: Known usually from sites near tide water, rarely at higher elevations in the Arctic. On rocks, cliff shelves, and other maritime outcrops; also on dead wood and the bark of trees.
Comments: The plants are occasionally fertile. This seems to be one of the very few bryophytes that are found only in the near vicinity of salt water in southeastern Alaska (two other notable examples are Grimmia maritima and Ulota phyllantha), although it is known away from the sea in the Arctic. Among the several species that are known only from the northern Pacific region this species is somewhat atypical in that the center of the distribution and the southern limits of its range seem to be farther north than most. Persson (1962a) suggests that the main area may be the subarctic and arctic portions of Asia and North America on both sides of the Bering Sea.