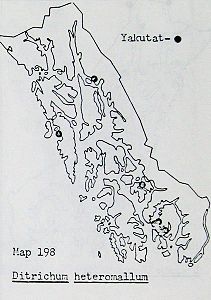 [as D. zonatum] Usually subalpine and alpine, in damp cliff crevices, among rocks and occasionally in tundra vegetation. Also known to descend to near sea level in similar environments.
Comments: This species is known in southeastern Alaska only from areas of human activity, especially on roadcuts.

[as D. zonatum] The Alaskan material is always sterile.