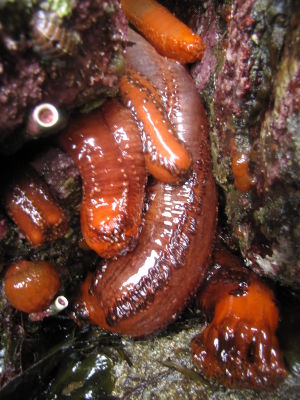 Orange sea cucumber:
Orange sea cucumber (Cucumaria miniata): This is the sea cucumber most commonly seen by beachcombers at low tide. It is often spotted as a series of orange "flowers" blooming under the surface, which together with the usually unappealing look of the animal out of the water, make it a good candidate for the organism that undergoes the steepest drop in popularity as it exits the water. In fact, these are the feeding tentacle of this interesting creature, which is related to starfishes, sand dollars and sea urchins. This is not the sea cucumber which is locally harvested by commercial divers, which is California sea cucumber (Parastichopus californicus).

This sea cucumber is most abundant in steep, narrow places where rubble line the shoreline and strong tidal currents bring lots of nutrients. In some such places, the abundance of orange sea cucumbers "in bloom" make the seawalls look like underwater fields of California poppies.