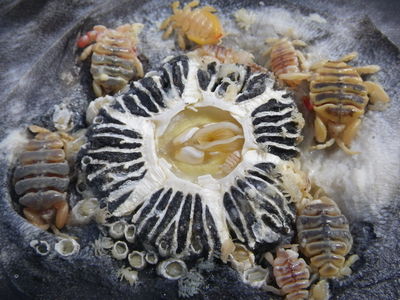 There is some evidence that whale lice such as Gray whale lice (Cyamus scammoni) help keep down the numbers of whale barnacles by causing the skin to heal and expel the barnacles.

When a specimen is found that isn't attached to a whale, it can be identified by the very restricted amount of barnacle that sticks out of the skin. Humpback whale barnacle (Coronula diadema) isn't as squat, and sticks further out.