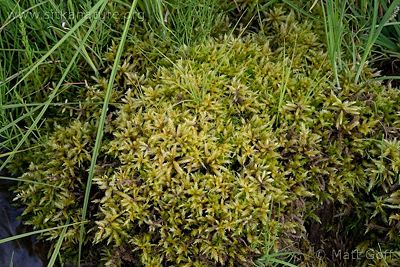 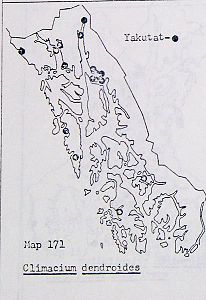 
Southeastern Alaska Distribution: Rare except in the northern part of the region.
Habitat: In southeastern Alaska: a) An almost prostrate form grows at the mouths of lakes along banks, usually among grasses; b) A large, dendroid form grows on slopes and among fallen leaves in the Alnus stage of post-glacial succession; c) A middle sized dendroid form occasionally can be found in the richest of the herbaceous alpine meadows. Elsewhere in its range the species is best known from soil and soil-covered rocks where it is wet, such as along streams, swamps, lakes, meadows, etc. From sea level to the middle alpine.
Comments: The species is always found sterile in southeastern Alaska.

Abundant along the upper mudflats at the head of Blue Lake in Sitka.
Retrieved from "https://wiki.seaknature.org/w/index.php?title=Climacium_dendroides&oldid=78076"
Categories: