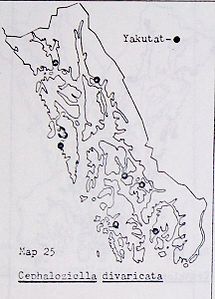 
Southeastern Alaska Distribution: See Map. Throughout. The only previous Alaskan report was from Washington Bay (southeastern Alaska) made by Eyerdam (1952).
Habitat: On rocks, often in highly insolated sites, from sea level to the subalpine, occasionally on soil. Usually on siliceous substrate, rare over basic rocks. [as C. d. var. scabra] Exposed sites, on rocks or among other bryophytes. Sea level to the subalpine. Also reported from seeps (Schuster, 1953).
Comments: Perianths are relatively common, but sporophytes have not been seen in southeastern Alaskan material. This species is frequent along roadcuts, sea cliffs and similar exposed rock surfaces. [as C. d. var. scabra] In western North America this variety is reported as far south as California. The reports from southeastern Alaska are all from climatically drier sites, a fact not in disagreement with the rather southern distribution of the variety on the Pacific North American coast.