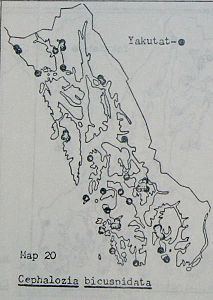 
Southeastern Alaska Distribution: Throughout. [as Cephalozia ambigua] Known only from Yakovi [Yakobi?] Island (Persson, 1946).
Habitat: Diverse; on decaying wood, peaty soil in forests, often as pure colonies. In western North America it is more common on decaying wood than elsewhere in its range.
Comments: The species is commonly fertile. [as Cephalozia ambigua] In Fennoscandia the species is usually on moist soil in the alpine and subalpine regions, descending to the conifer forests on paths, etc., and in mires (Arnell, 1956). An oxylophyte, either on acidic rocks in the mountains, or in moory, sandy areas (Schuster, 1953).