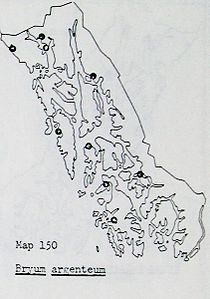 
Southeastern Alaska Distribution: Widespread although rather infrequent.
Habitat: In southeastern Alaska rare in natural sites (among rocks and on soil in calcareous sites), but occasional to locally abundant wherever there are concrete sidewalks, buildings and roadways.
Comments: Although infrequent to rare in portions of the tropics this species approaches a true cosmopolitan distribution. Its range and abundance has been markedly increased with the advent of concrete as a building material.