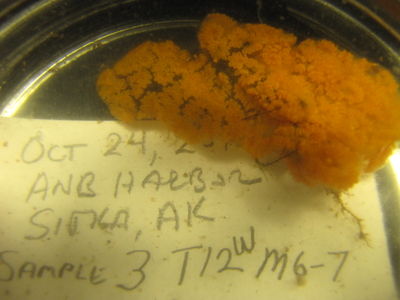 Golden star tunicate:
Golden star tunicate (Botryllus schlosseri): This invasive species is fairly common as a fouling organism on boat hulls, on mooring structures, and under docks. Any sighting in a remote setting, or further than half a mile from harbors, floathouses, and docks, should be reported as soon as convenient to the Alaska Department of Fish and Game, 1-877-INVASIV.

This species can be identified thanks to the organization of its zooids into stars, or circles. each individual has one incurrent siphon, and those tend to be organized in circles.