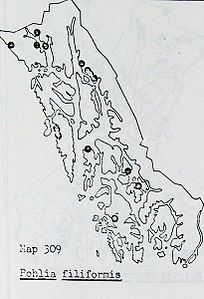 Ian Worley
[as Pohlia filiformis]
Southeastern Alaska Distribution: Not previously reported. Widespread.
Habitat: A calcicole. Usually in isolated strands in shaded rock crevices, and on soil over rocks on cliff shelves. Associated with Plagiobryum zierii and Myurella spp. Generally near sea level, occasionally to the base of the subalpine.
Comments: Only occasionally with sporophytes (none seen in the southeastern Alaska material). Vegetative reproduction by short-stalked, axillary microbranches (at least in the European plants, fide' Nyholm, 1954-65).