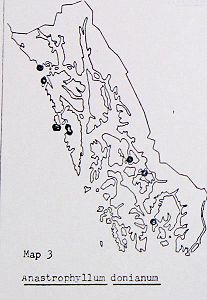 
Southeastern Alaska Distribution: Most common on islands nearer the open sea, there from near sea level to the subalpine; also on inner islands at elevations above 1500 ft. Widespread and not uncommon, but often local.
Habitat: As strands or somewhat extensive colonies in rich peatlands, on peat banks, stream margins or among bryophytes on slopes. Most frequently in higher peaty slopes and openings, well into the subalpine. Occasionally from mucky areas.
Comments: Sporophytes and gemmae unknown. This species is one of the better known of the Tertiary relics. Its distribution is similar to that of A. assimile and is best accounted for by considering the existing populations as ancestral remnants of a more extensive and continuous Tertiary population.