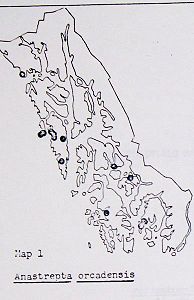 
Southeastern Alaska Distribution: Most common on islands nearer the open sea, there from near sea level to the subalpine; also on inner islands at elevations above 1500 ft. Widespread and not uncommon, but often local.
Habitat: In open peatlands, seldom as extensive clones, but usually as isolated strands in other bryophytes (eg., Rhacomitrium lanuginosum, Paraleucobryum enerve, Antitrichia curtipendula, Herberta himalayana, lichens, and species of Sphagnum.), often under low shrubs, occasionally on low branches or stumps. Although only in areas with considerable rainfall, the species seems to prefer habitats that are somewhat elevated or well-drained; this contrasts somewhat with the Queen Charlotte Islands material of Schofield (1968b).
Comments: Dioicous, occasionally with sporophytes, often with gemmae. Reproductive structures not seen in Alaskan material. The species has a disjunct, almost circumboreal, distribution that probably reflects areas of refuge during the Pleistocene. It is decidedly oceanic.