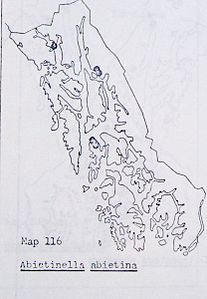 
Southeastern Alaska Distribution: See Map 116. Locally abundant in "Dry Climate" areas.
Habitat: On rocks, cliffs, talus and similar habitats wherever edaphically dry and highly insolated, usually in calcareous situations. From sea level to the lower subalpine.
Comments: Sporophytes not seen in southeastern Alaska. Where found in the region this species is often locally widespread and abundant. It is, however restricted to the "Dry Climate" zone. It is absent from apparently similar habitats in other parts of the region. Abientinella abietina is frequent in the interior of Alaska, the Yukon and British Columbia, and is found only in exceptional sites on the oceanic side of the coast range.